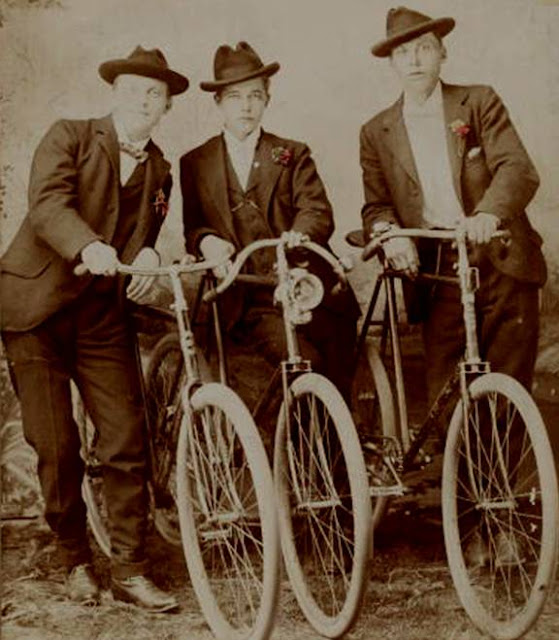 This photo was taken seven years before Ford produced his first automobile in 1903.
The above photo was taken in 1896 in Superior, Wisconsin, at a studio on Conner’s Point then known as West Superior. Left is Christ “C.C.” Grimsrud b.1879, my grandfather.  Next is Louis the (adopted stepson of Martin Grimsrud b.1862) and Hans Grimsrud b.1877 and the older brother of C.C. Grimsrud. Christ, Hans and Martin were all brothers born in Norway who immigrated to America before 1895.
The era was referred to as “the golden age of bicycles”. My grandfather Christ, on the left, had a Victor bicycle, the first with pneumatic tires that were glued onto lightweight wooden rims. Hundreds of firms were competing in this intense market of high demand where the typical bicycle was selling for $100.00.
The bicycle in the center is equipped with a carbide lamp, the same type used by miners. 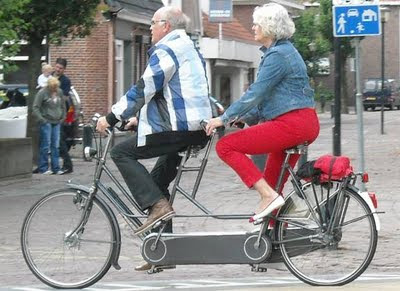 Ootsmarsum, Netherlands attracts tourists from all across Europe and most arrive by bicycle. This is the heart of cycling along the German border where each town has its weekly market day and outdoor dining places line the quaint old time streets. 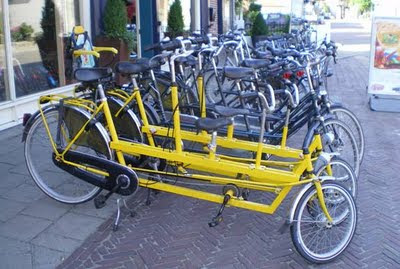 Ootmarsum, Netherlands; this bicycle shop has a steady flow of touring cyclers from all around Europe and many local accommodations are known as B & B’s, that is bed and bike hotels. 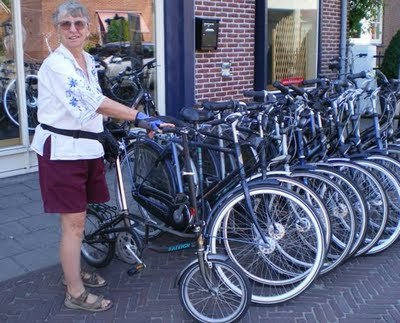 Jane admires a 16 inch British made folding bicycle. These interesting little bikes have evolved into serious transportation vehicles because they not only go fast and are terrific in traffic, but they fold quickly to take aboard trains, airplanes and even into your hotel or office. 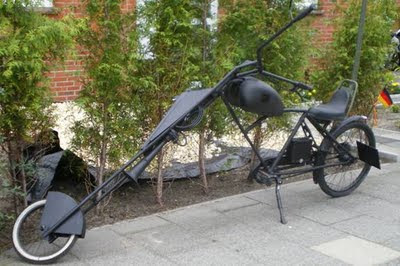 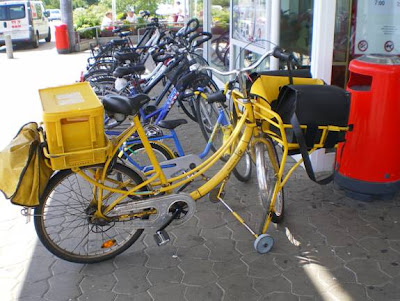 The German mailman goes in sun and snow and doesn’t burn a drop of fuel. Parked on ancient cobble stones this relic of the past milk delivery bicycle has enjoyed a long life of service in rural Georgsdorf, Germany and still rolls. 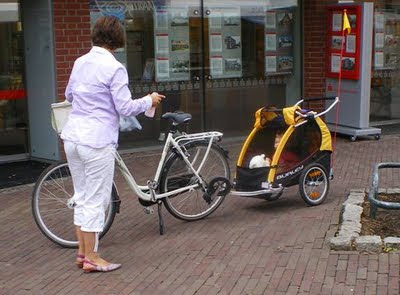 A city shopper trails a kiddy kart equipped for rain or shine on the quiet and clean streets of Nordhorn, Germany. It is hard to top this place for neat, clean and quiet. 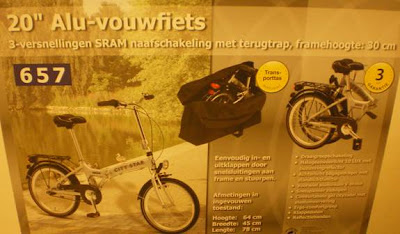 Made in Germany, this alloy three speed folding bicycle comes complete with halogen running lights that activate automatically and run off from an internal generator. The amazing thing is that a tote bag for shipping on an airplane is included and all sells for 200€ or $260.00 U.S.D.  This is the sale price at Aldi chain stores in Europe. 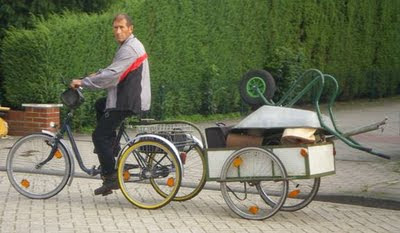 Pedal powered and ecologically friendly freight hauling neatly hits the streets of Germany. This man is keeping the country clean by recycling without burning a drop of fossil fuel. 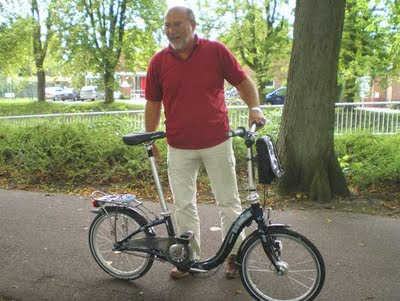 A happy biker cruises the smooth paved bicycle path along one of the many canals of Nordhorn, Germany, on the latest Dahon alloy folding bike. Folding bicycles all across Europe have recently become very popular for commuters and campers like the man above who has his camper van rig parked at the city’s municipal camping place. 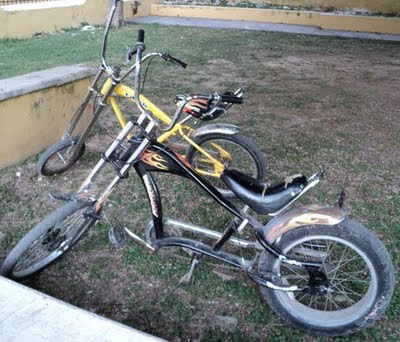 This is Yucatán, Mexico where these exotic bicycles are for the young. 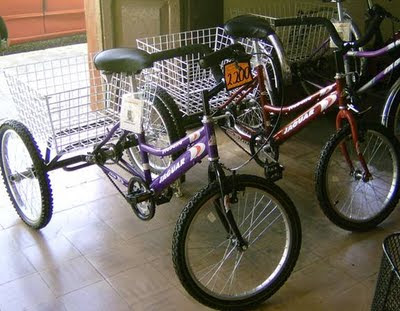 20 inch tricycles make a scaled down shopping cart convenient for short trips. This is Yucatan, Mexico and the price tag is in pesos and equivalent of less than $200 US. 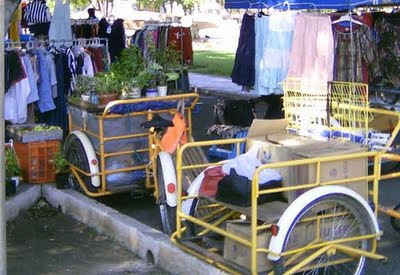 This flea-market is delivered and set up using only people powered tricycles or triciclo de carga. 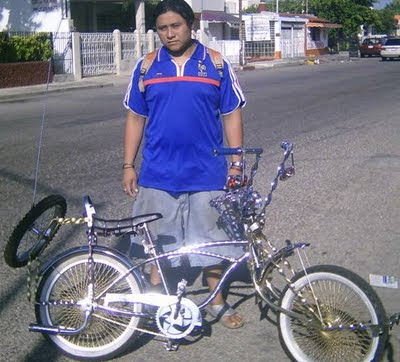 This young man in the photo above went the extra mile to dazzle with glitter and glitz. 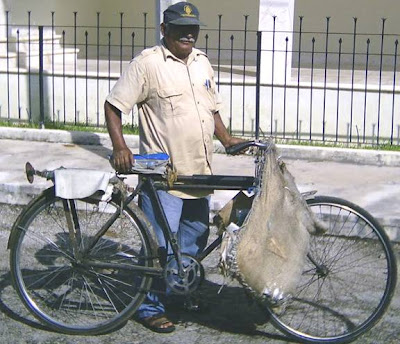 Eligio Chi Perez, pictured above, begins his day before sunup by riding his bicycle seven kilometers from his home in Colonia Bojorquez to the Diario de Yucatán office in downtown Mérida to pick up the newspapers to deliver.
Each day his delivery of 175 newspapers takes him as far north as the Grand Plaza area, eight kilometers from downtown.
Still smiling seventy-one year old Eligio has faithfully made his rounds for the past fifty-two years.
Amazingly he has only worn out two bicycles in the process and not burned a single drop of gasoline.
A special congratulations to one of Yucatán’s most ecologically friendly citizens, Eligio Chi Perez. 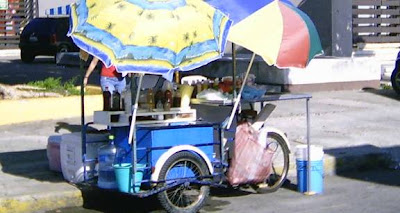 Ready to roll home when the work day is finished this home made tricycle converted to a fruit drink bar expands into a curbside business. 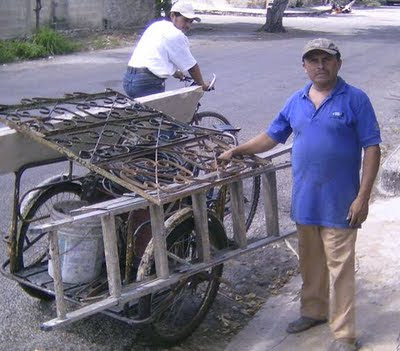 A portable welding shop hits the streets of Mérida, Yucatán, Mexico. These tricycle’s are pressed into service for everything from taxis to mini-restaurants. 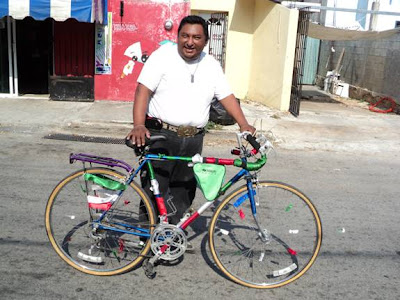 This bike started life as a conservative Schwinn but when Carlos *Cherli” Dzidz Chí got it, he has 'mexicanized' it with reflectors, ribbons and fancy do-dads. Now it is exotic. 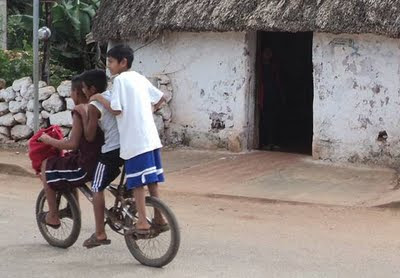 Biking on the streets of Yucatán; one kid to steer, one for locomotion and a passenger aft.  A device called a “diablo”, or devil is fastened to the axle shaft ends and is designed to stand on making extended passenger carrying capacity possible in the land where safety is an option. 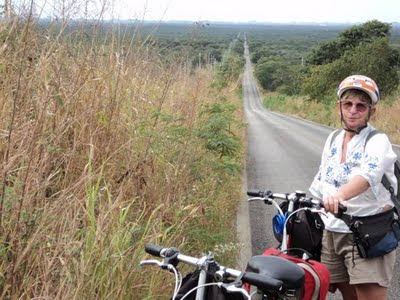 Cross country in Yucatán on our Dahon folding bicycles - with our starting point far off in the distance of the Puuc hills, Jane and I halt on a hill top to collect our breath and hydrate.

©2011 John M. Grimsrud
For more on bicycling Yucatán, Mexico, and Europe check out our website at
www.bicycleyucatan.com

To read more about the golden age of bicycles, I recommend The Lost Cyclist by David V. Herlihy.
Posted by JJ Yucatan at 5:30 PM

This much informative article I didn't read Anywhere thanks for sharing such a good article.