GERMANY, GREEN AND CLEAN - Leading the world and on the cutting edge in solar, wind and recycling technologies. 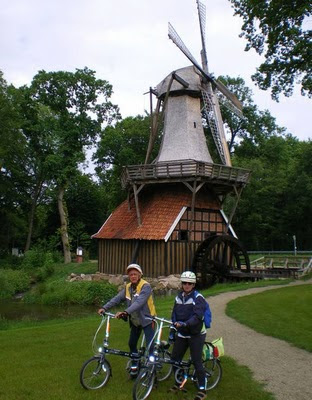 Still fully functional after more than two centuries of dependable, clean and non-polluting production, this 1802 grain mill in northern Germany combines hydro with wind power, cleanly powering Germany from its beginning.
Germany may not have been the first to initiate these green and environmentally clean power sources but on the eve of the industrial revolution they were there to lead in innovation. An example is the mill pictured above where two sources of power are tapped so either wind or water will keep production dependable.
In the above photo, John and Jane Grimsrud enjoy the world’s best bicycling with their novel Dahon folding bicycles that fit perfectly with Germany’s extensive well marked paved bicycle paths. Buses, trains, airplanes and even the ferry boats are bicycle friendly here.
Bicycles are a way of life here, children ride to school, and adults go to work and shopping, tourist’s vacation cross country staying at bed and bike hotels. This goes on year round in sun or snow. 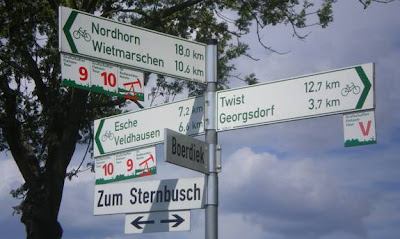 Germany, besides having excellent bike route maps and smooth paved trails that are clearly marked with information signs like the one above, has set a world standard. These information signs are literally loaded with facts.  Even the small red and green tabs above, 9, 10, V, and the petroleum pump indicate special bicycle tour routes that are designated on biking maps available at book stores and tourist offices. 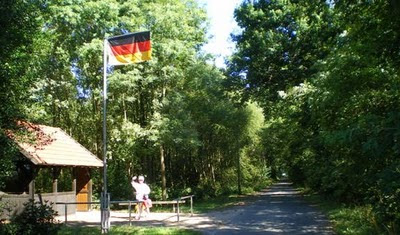 Germany has gone all-out to make your bicycling experience world class.  This is one of thousands of covered bicycle shelters that are conveniently placed, meticulously clean and well equipped with tables and benches. Note the plate glass picture windows and barred off parking place for bikers only…no cars.

This historic canal dates from the 1870’s and was built by the muscle of man and beast. Connecting to the textile center of Nordhorn, this Ems-Vechte Canal heads east and links with the Dortmund Ems Canal that was built in 1899.
The busy and sill active Dortmund Ems Canal connects the German industrial heartland with the North Sea Port of Emden. Most of these interconnected canals that crisscross Europe have lovely bicycle paths with numerous covered shelters and plenty of accommodations.
The monumental effort required to complete this European canal system must rank with the wonders of the world for human engineering and effort.
Initially the canal traffic was moved by beasts of burden plodding along a tow path, next steam engines did the work.
Nordhorn is still a city of canals but its heavy industry no longer exists. Now this beautiful canal is silent except for the birds that have made it their seasonal home.
This incredibly beautiful hardwood forest that flanks the border is now quietly enjoyed by bicyclers. They glide silently beneath the towering shade trees on the bike paths stopping along the way at the numerous covered picnic tables like the one you see above. 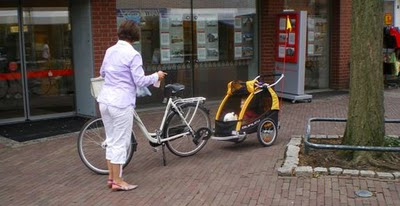 Here in downtown Nordhorn this neatly dressed lady is doing her shopping by bicycle with her young child comfortably riding in the attached kiddy cart. Notice the cleanliness of the brick street.
Another interesting thing in most of Europe is that all school children are given unrestricted free public transportation. They do however prefer their bicycles. 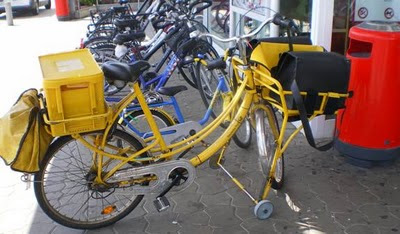 Even the dependable German postal service that delivers rain or shine is ecologically friendly with these specially equipped bicycles.
This photo is taken at a grocery store where you can see that bicycling clients have top parking priority.
Also in the above photos notice the cleanliness that is the German standard.

In the balance of things ecological bicycling is as close to an equilibrium with nature as you can get. Here in Europe, bicycling to school, work, shopping, and recreation, is an every day part of life. Pictured above, the red part of the pavement is reserved for bicyclers only. Motor traffic can use the bicycle area but must give up total right-of-way. This system works well in the country where there are narrow roads and little traffic.  (Border town of Denekamp, NL) 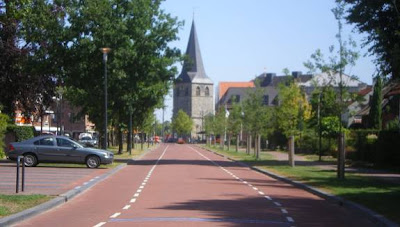 The bicycle lanes are clearly designated.  Because the gasoline and diesel fuel prices are nearly double that of the US, there is a noticeable lack of motorized traffic and a heavy reliance on bicycles. (Border town of Denekamp, NL) 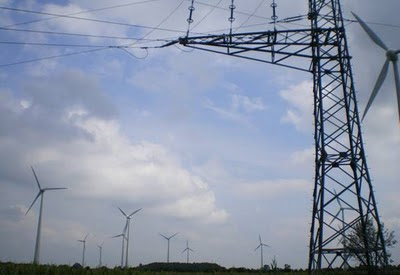 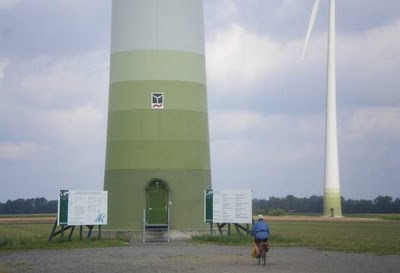 Enercon the German company that designs, manufactures, and installs these non-smoking colossal wind generators that make life here cleaner and better has an impressive track record. In the past ten years they have more than quadrupled the clean electrical power they are providing, and are on track to meet their goal of supplying twenty-five percent of Germany’s electrical power requirements with wind alone.
In the above photo you can get a perspective of the size of these wind powered generators when compared to Jane on her bicycle.

This is a close-up of the sign at this Enercon wind generating station at Bimolten, Germany, near Nordhorn. This facility of fourteen generators produces the electrical energy necessary to power 14,000 four person households. Here in north Germany the homes are truly total electric…they even have electric powered windows and awnings…this is a push-button world. 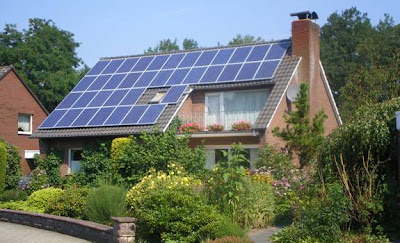 North Germany is at nearly 53 degrees north latitude, about the same latitude as southern Hudson’s Bay in Canada. Photovoltaic or solar electrical generation has more than come of age here. They top the world in solar generation and have a goal of producing twenty-five percent of their needs.
Solen Energy Company at nearby Meppen, Germany, is the manufacturer, distributor, and installer of nearly all of these photovoltaic panels, but BP, Shell Oil and Sharp Electronics have also been major players in this green revolution.  The above private home is a good example of how the people with government incentives have made a positive impact in leading the world in clean living. 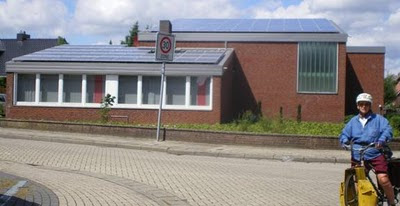 Solar electrical generation is everywhere in Germany. Private homes, government buildings like the one above, industrial facilities and even farms are all getting involved.

This two-hundred meter long pig farming facility has been fitted with enough solar generating panels to provide the power to take care of the needs of at least twelve private homes.
In the back-ground is a wind farm also cleanly producing more electrical power.
Believe it or not, but Nordhorn, Germany, even has a solar powered excursion boat that gives canal tours.
Here at these northern latitudes solar heated water systems in homes are very common and becoming more popular all the time. 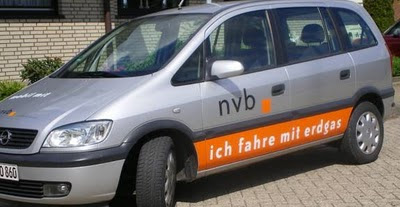 Nothing goes to waste here in Germany. Propane, butane, methane, and other gases that are by-products of petroleum and farm product production are separated and used to heat, generate, and propel. Clean, quiet, and efficient, the above auto proudly advertises the fact that it is going far with earth-gas.

Taking bio-energy another step further, this vibrant field of sunflowers is being cultivated to provide the component required to make enough heat energy through gasification to warm the large complex of buildings at Frenswegen Kloster near Nordhorn, Germany.

This is part of the building complex to be heated by the above sunflower field.

Again Germany takes the lead when it comes to re-cycling. The people are responsible for disposal of their own glass garbage. Homeowners dutifully remove corks and caps from their glass containers and according to color, green, clear, and brown, deposit them in containers like the ones you see above found in neighborhoods and at shopping places. The grocery stores have places for used disposal of batteries, corks, and even all merchandise packaging…this is the law.
Most all grocery stores also have automated bottle returns for bottles with deposit. You put your bottles in one at a time, they are scanned, and when you are done, press a button and the machine then prints out an itemized credit slip that you turn in at the check-out.  The American Woman’s Club of Cologne (Köln) has done an outstanding job of chronicling Germany’s world class recycling program, click this link: http://www.howtogermany.com/pages/recycling.html 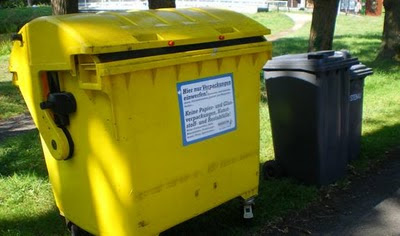 Different colored refuge containers for sorted garbage are collected on specified days.
Compostable garden material is not picked up and must be taken to the municipal disposal center. The upside of this is that the city then does the complete composting process and homeowners are welcome to then pick up as much fully composted material as they want at no charge. In other words, the city composts, stores and makes available as much as you want when you want it. 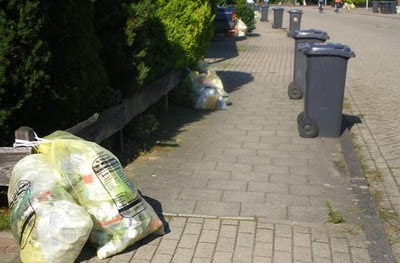 This is garbage pick up day in Germany. Notice that the canisters are precisely parked exactly on the curb line. This is something that the Germans take special pride in…precision!
The plastic bags with draw-strings are for recyclable plastics disposal and are given out free of charge at the grocery stores.
Many public park benches and tables are made from re-cycled plastic, from the unwanted garbage to something beautiful and useful.

This 1600’s vintage water driven mill at the little town of Lage near Nordhorn is still fully functional and in service to this day cleanly operating without burning a single drop of fossil fuel. Germany is a tough act to follow.
READ: Part 2, Germany Clean and Green - Compost and Recycling