Quintana Roo – The road from self-sufficiency

On a recent two month trip Jane and I became acquainted with the shopping in Tulum.
At the “Pool” produce/vegetable market, we found all under one roof things we scour Mérida for with its one million population.
Our curiosities led us to this story. 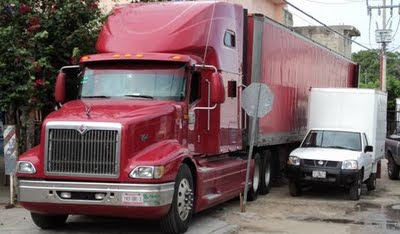 This diesel monster truck deadheads without cargo from Tulum to the Valley of Mexico, a distance of 1,000 miles or 1,500 kilometers in 30 hours, burning over 2,000 liters of fuel and returning with 28 tons of produce. This trip is made twice weekly in the high tourist season and only supplies the needs of one customer.
At the time Quintana Roo became a state there were no food imports and the people were completely self sustaining…that was 37 years ago.
By an ironic and twisted fickle turn of fate the Maya of Quintana Roo, México staved off the Spanish for 400 plus years because of one man, Gonzalo Gurerrero.
Read his story…link. http://www.bicycleyucatan.com/gonzaloguerrerochetumal.html
The Maya of Quintana Roo remained independent and self-sustaining. Land belonged to those who worked it…it was simple. Not like their Mayan brethren in adjacent Yucatán under the oppressive jack-boot of the “hacenderos” or Spanish hacienda owners who took their land, plundered their spiritual heritage and impoverished them into servitude.
Quintana Roo was a pristine tropical paradise abounding in seafood, dense tropical jungles of exotic flora and fauna and scarcely any infrastructure…that was then.
October 8th, 1974, this all changed forever when Quintana Roo became the 30th state in México and the “federal land registry” established ownership with property perimeters.  When Quintana Roo first became a state it was seldom visited, had nearly no paved roads and tourism was unheard of outside of the newly created resort town of Cancún. Besides being undeveloped it was a smugglers paradise for clandestine merchandise that strangely found its way into Mexico by night.
Now the land grab would begin in earnest.
Not until the 1970’s were highways built and Quintana Roo became recognized as one of the most beautiful resort areas in the world.
In 2011, just 37 years later, the pristine tropical forests have been stripped of their exotic timber; conch, lobster; reef fish and even the coral reef have been pillaged and plundered beyond restoration.
Infrastructure has arrived!
Airports, super highways, mega shopping malls, five star all-inclusive resorts, giant cruise ships queued up to disgorge thousands of visitors daily and land speculators, and hotel developers. Shopping plaza builders are bulldozing the jungle with no end in sight.
Today the state is no longer self sustaining and exports are nearly non-existent.
© 2011 John M. Grimsrud
Posted by JJ Yucatan at 8:46 PM No comments:

Piracy was the scourge of colonial Yucatán, the Caribbean Sea and the Gulf of Mexico.
From the beginning of Spanish occupation of America pirates ravaged their shipping. Gold looted from the Indigenous Americans being shipped back to Spain proved an irresistible treasure.
French and English kings encouraged and sanctioned these privateers, making contracts with them specifying the proportions of the spoils.
Buccaneers John Hawkins, Frances Drake, Henry Morgan, William Parker, Laurens de Graff, Henri de Gramond and Jean Lafitte made their names legendary.
Dzidzantún, Campeche, Tihosuco, Valladolid, and Bacalar were some of the towns that the pirates brazenly conquered and occupied.  Many of the pirates took up residency with families on Yucatán’s desolate northern coast and along the Caribbean Sea. A story is told that Jean Lafitte is buried at the Gulf of Mexico coastal town of Dzilám de Bravo, Yucatán.
Speculation interspersed with myth and rumor spiced with unsubstantiated historical facts have made Jean Lafitte legendary. Here is a glimpse at some of those buccaneer stories that are floating around.

On June 18, 1812, the United States, with little naval power declared war on Britain.
They now sailed three ships, the largest privately owned buccaneer fleet on the coast.
Lafitte at Barataria Island held letters authorizing them to capture booty from various foreign countries.
The citizens of New Orleans were grateful to the Lafitte’s for providing them with luxuries.
The United States Navy did not have enough ships to attack Lafitte at Barataria Island. The government then charged Lafitte with "violation of the revenue law.
Pierre Lafitte, brother of Jean was arrested and jailed on charges of "having knowingly and wittingly aided and assisted, procured, commanded, counseled, and advised" persons to commit acts of piracy".
While Pierre was incarcerated, Jean continued to operate the smuggling business.
Great Britain dispatched an armada and 8,000 men to take Louisiana.
A British ship fired on a smuggling ship that was returning to Barataria Island owned by the Lafitte brothers.
The commander had been ordered to contact the "Commandant at Barataria Island". King George had offered the Baratarians British citizenship and land in the new British colonies of America if they promised to assist in the fight against the United States. If they refused the British Navy would destroy the Barataria Island base.
Lafitte was convinced that the United States would prevail in this war.
Andrew Jackson a Commander in New Orleans, had almost no men or ships. The governor was forced to free the imprisoned pirates (the "Hellish Banditi" as Jackson called them), because they were needed.
Privateer Jean and his brother Pierre guided the American forces through the marshland with 4,000 Tennesseans, Choctaw Indians, freed blacks, Creoles along with their pirates.
The British fleet reached the Mississippi River and Lafitte realized that the American line of defense was too small. The British began firing at the American lines, but were repulsed. Jackson singled out Jean and Pierre Lafitte for "exhibited courage and fidelity. Jackson requested clemency for the Lafitte brothers plus the men who had served under them.
Lafitte and other pirates operating in the area began targeting ships carrying legal goods to Cuba, angering Cuban officials. By the end of 1822, Cuba had banned all forms of piracy. Lafitte continued to patrol the shipping lanes around Cuba. In November 1822, he made news in the American press after escorting an American schooner through the pirate-strewn area and providing them with extra cannon balls and food.
By 1825 piracy had been essentially eradicated in the Gulf of Mexico, and "the new world.
Ultimately the Spanish navy actively and vigorously hounded these privateers, destroyed their sanctuaries, shooting and hanging the freebooters.  Deprived of their plunder many former pirates turned their efforts to smuggling and trading in exotic clandestine tropical woods.
For whatever it is worth, many of the costal towns of the Yucatán peninsula are said to be peopled with descendants of these pirates to this very day.
Speculation about how Jean Lafitte died;
He changed his name and disappeared.
He was killed by his own men after leaving Galveston.
He rescued Napoleon and they died in Louisiana.
Jean Lafitte was killed on his privateer ship General Santander, serving Columbia, in 1823, age 41, in the Gulf of Honduras. Lafitte encountered two disguised Spanish warships, was wounded, died and buried at sea.

Pierre died in 1821 in Mexico and was buried in the town of Dzilám de Bravo, Yucatán; a monument to Jean Lafitte is there today.
About 13 kilometers west of Dzilám de Bravo in a small cemetery a wooden grave marker was found with the inscription; Jean Lafitte. (Historians question the validity.)  Pierre Lafitte, Jean’s brother, is known to be buried in that cemetery.
Jean’s marker, authentic or not was moved to the museum at Puerto Aventuras on the Caribbean coast at Akumal, Quintana, Roo, Mexico.

Excerpt from the “Diario de Yucatán newspaper, 9, July, 1960; “LA TUMBA DE JEAN LAFITTE”; Translated caption; Mister Luis H. González, representative of the club of Explorers and Sports Archeologists of México, (CEDAM) informed us that they will present a plaque on the 20th of this month and dedicate it at the tomb of the pirate Jean Lafitte in the town of Dzilám de Bravo. The plaque will be dedicated by club founder and president Pablo Bush Romero, a prestigious hunter and sportsmen,  in cooperation with The Caribbean Archeological and Exploring Society, The Middle American Archeological Society and the Yucatán Exploring Society, important archeological societies of the United States. 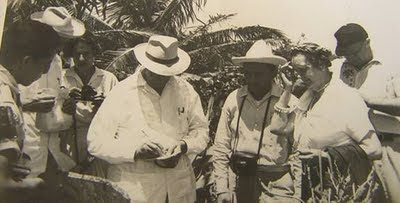 July 20, 1960, photo of dedication of plaque. From left: unknown, Mr. Gowen, Clara Gowen, Pablo Bush Romero, Luis González, Alma Reed and unknown.  The above photo is courtesy of Luis H. González.
Luis González contributed the monument stone, which had been a González family grave marker. He engraved the back side with the Lafitte information that is now exposed.

Posted by JJ Yucatan at 7:10 PM No comments: