Anzio: Italy and the Battle for Rome,1944 by Lloyd Clark 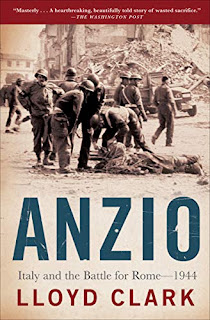 Anzio, a little known quiet coastal town that marked a turning point of WWII, got caught in the cross hairs of time.

My uncle Lawrence Grimsrud, rifle in hand, somehow survived this deadliest of allied landings but sustained mental scars that plagued him his entire life.

This moving story helped me put a human face on this blood bath.

Excerpts:
Anzio had gained a reputation for being one of the most dangerous places on earth. Troops arrived not expecting ever to leave.


The war correspondent Eric Sevareid entered the town soon after it had fallen and was shocked by the utter destruction that he found there. There was no longer any pattern to the streets, merely broken walls, brick dust and thousands of spent cartridge cases. In the wake of the tumult Cisterna had taken on an eerie stillness. Sevareid wrote: In the little park the palm trees lay blackened and uprooted. Over them a shining white victory statue stood erect on a pedestal. It was the figure of a woman holding aloft a torch in a gesture of triumph. Though her marble head and her torch were gone, in its present attitude of shocked surprise the statue seemed the only vital, living thing within the town.
Operation Overlord was to be the beginning of the end of the war against Germany for the Western Allies, not Operation Diadem. The price of this pyrrhic Italian victory had been too high, with 44,000 Fifteenth Army Group casualties since 11 May, whilst a large proportion of Tenth Army had managed to escape to fight another day. Rome had always been of limited military value, and few people, apart from Mark Clark and the Italians, got overly excited about its capture. For most, Allies and German alike, the events of 5 June were to merely usher in a new phase of the war in Italy. In a remarkable case of strategic myopia, Clark had been blinded by the Eternal City.

From Chocolate to Morphine: Everything You Need to Know About Mind-Altering Drugs 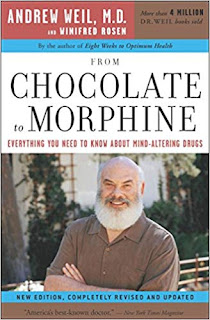 BOOK REVIEW-FIVE STARS
From Chocolate to Morphine: Everything You Need to Know About Mind-Altering Drugs by Andrew Weil

Defining, describing, analyzing, cautioning, and comparing a wide spectrum of drugs along with many substances not normally considered as drugs. Fascinating, informative, and well written, everybody needs to be aware and this book delivers the message.
Excerpts:
Our purpose is not to encourage or discourage the use of any drug but rather to help people learn to live in a world where drugs exist and not get hurt by them.

We pay a high price today for our rejection of natural medicines in favor of potent chemicals. The tendency of pharmacologists and doctors to regard more potent drugs as better drugs encourages the use of dangerous derivatives of plants, when often the milder, natural originals would do as well.

It is clear that drug laws have done nothing to discourage people from becoming addicts. There are more addicts than ever, and the kinds of addiction are worse than before those laws were passed. The prohibition of opiates has spawned an ugly criminal underworld, given rise to powerful drug warlords, and led to the widespread corruption of public officials. Campaigns to stamp out heroin, while popular with politicians, have invariably had the opposite of their intended effect, ultimately causing more heroin to enter the world market, not less.

Email ThisBlogThis!Share to TwitterShare to FacebookShare to Pinterest
Labels: Andrew Weil, Dr. Andrew Weil, From Chocolate to Morphine: Everything You Need to Know About Mind-Altering Drugs, John Grimsrud 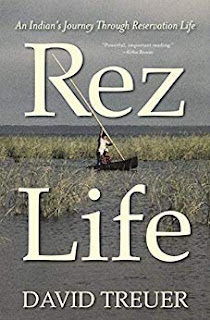 BOOK REVIEW-Five Stars
Rez Life: An Indian's Journey Through Reservation Life by David Treuer
America’s ruthless history of “Manifest Destiny” with land free for the taking with Winchester repeating arms was unquestionably out and out genocide. This malevolent greed had no limit and was sold to the public as their inalienable right over savages.
This must read book is an honest look at America outside the bubble.
Excerpts:
I think it is safe to say that many Ojibwe would go back to using wooden spears and birch bark canoes if non-Natives simply fished with cane poles from shore, with bits of pork rind on the end of their hooks, only as far west as the Ohio River.

Tom Shingobee has in his possession a grocery receipt totaling seventeen dollars that his father had to settle by signing over his 160-acre farm. During World War I, when many of the men were away fighting in Europe, the timber stands were cut down by large timber outfits. One man remembers coming home to his beloved forests only to find a desert of slash and brush and not a tree in sight for miles.

In all, during the forty-seven years the Dawes Act was on the books (the Indian Reorganization Act, passed in 1934, officially stopped allotment but did not formally rescind the policy), Native Americans lost more than 90 million acres of tribal lands, about two-thirds of the lands held by Indians when the Dawes Act was passed; Indians lost, roughly, land that equals the size of the state of California. Ninety thousand Native Americans were left landless and largely homeless. The problems of this kind of landlessness were felt well into the 1970s and are still felt today. During that time, many Indian families were found to be living in cars, under porches, and crammed eight and sometimes ten to a room in dilapidated shacks across the country.

First let me say, everybody has problems.

A note: Our Dahon folding bicycles made eight trans Atlantic crossing and miraculously survived brutal handling, this was the crowning punishment. They are still rolling with us.