Passionate Declarations: Essays on War and Justice by Howard Zinn 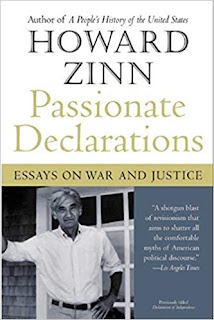 I loved the book’s curiosity building momentum that was unrelenting. Zinn wove this informative volume around the Constitution and its Bill of Rights putting an interesting prospective on its framers, their contemporaries, and detractors. I would only recommend this book to those people who want to contemplate history objectively.

In the 1960s, a student at Harvard Law School addressed parents and alumni with these words:

“The streets of our country are in turmoil. The universities are filled with students rebelling and rioting. Communists are seeking to destroy our country. Russia is threatening us with her might. And the republic is in danger. Yes! danger from within and without. We need law and order! Without law and order our nation cannot survive. There was prolonged applause. When the applause died down, the student quietly told his listeners: These words were spoken in 1932 by Adolf Hitler.”

Howard Zinn (August 24, 1922 – January 27, 2010) was an American historian, playwright, and social activist. He was a political science professor at Boston University. Zinn wrote more than twenty books, including his best-selling and influential A People's History of the United States. In 2007, he published a version of it for younger readers, A Young People′s History of the United States.

Zinn described himself as "something of an anarchist, something of a socialist. Maybe a democratic socialist." He wrote extensively about the civil rights and anti-war movements, and labor history of the United States. His memoir, You Can't Be Neutral on a Moving Train, was also the title of a 2004 documentary about Zinn's life and work. Zinn died of a heart attack in 2010, aged 87. From Wikipedia, the free encyclopedia.


“In our country we have those three unspeakably precious things: freedom of speech, freedom of conscience, and the prudence never to practice either.”
Mark Twain