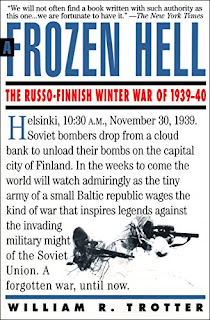 A History not to be forgotten; Little Finland, four million strong, stood up to the mighty Soviet Joe Stalin. Soundly beating back an over-whelming and unrelenting adversary only to then be invaded by Hitler’s war crazed Nazis.
Finland bordering Russia, Sweden, and Norway is a very good neighbor, and one of few over run countries of World War II that promptly repaid all of its war time debts.
Excerpt:
That an army so inferior in numbers and equipment, should have inflicted such serious defeats on an overwhelmingly powerful enemy, and, while retreating, have over and over again repelled his attacks, is a thing for which it is hard to find a parallel in the history of war. But it is equally admirable that the Finnish people, face to face with an apparently hopeless situation, were able to resist giving in to despair, and instead to grow in devotion and greatness. Such a nation has earned the right to live.

Email ThisBlogThis!Share to TwitterShare to FacebookShare to Pinterest
Labels: A Frozen Hell: The Russo-Finnish Winter War of 1939-1940, William R. Trotter

To the Barricades: The Anarchist Life of Emma Goldman by Alix Kates Shulman 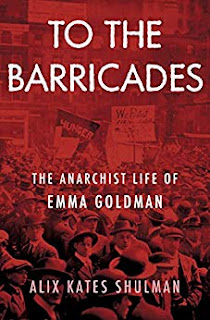 Born an activist, Emma Goldman led a life truthful to her beliefs in liberty for all.
Her inspiring story of her heroic and unabashedly sticking up for human rights causes was not the easy path.
Read about her detractors and their self-serving egotistic axes they felt compelled to grind.
Thought provoking and enlightening, this book will definitely rattle your brain.
Excerpts:
Then how would an anarchist society work without government? In an anarchist society every single person would be at liberty to do as he or she pleased. Being free, anarchists believe, people would choose to cooperate with each other voluntarily for the good of everyone. A word often used to describe this main feature of anarchism is libertarian. An anarchist society is based on individual liberty, not government authority or force.
Anarchists are not against order, as many people believe. They are only against imposing order by force or threat of force. They oppose the force used by governments against their own citizens through police, and against the citizens of other nations through armies. They believe that order would certainly prevail in a world where people were free to do as they pleased, because people would choose to make and follow certain rules for their own mutual benefit. That is a very different matter from being forced to follow rules imposed from outside for someone else’s benefit.

Du Pont Dynasty: Behind the Nylon Curtain by Gerard Colby 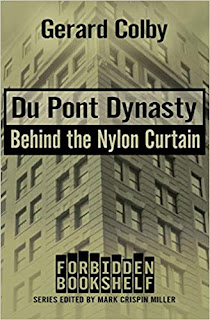 Two hundred years of history; the DuPont family moved to America in 1800 and rode the Industrial Revolution wave to the top. This intriguingly provocative and extensive tome narrates the tale how dedicated and focused determination capitalized into a winner take all.
Two hundred plus years of America’s scramble to it’s world wide top position are step by step documented, the good, bad and ugly. This excellent book is an eye opening prospective I recommend to those who desire to look beyond news hype.
Excerpts:
Strange coincidence: of all the records of congressional hearings stacked in the library, one was notably missing when I visited there in 1970, the 1934 Dickstein, McCormick hearings on the aborted plot for an armed coup against Roosevelt.

The CIA’s covert operation was in direct violation of United States law. Congress had refused to authorize any monies for the CIA to overthrow the Nicaraguan government and some Congressmen were furious that the Reagan administration had gone ahead anyway and ordered the CIA into action, backed by thousands of U.S. troops in Honduras.

America copies the Spanish conquistador inquisition crazed imperialist model.
Economic Supremacy, later paraphrased by Professor Woodrow Wilson, insisted that expansion was the key to wealth and called for America to accept its historical destiny as the new center of empire and make the Pacific and Asia its colonies. Alfred Thayer Mahan agreed, calling on the federal government to accept “The White Man’s Burden” by building a large navy that would forcibly bring the white, Anglo-Saxon, Protestant God and civilization to the heathen world.

Nixon quote...”I an Not a crook!”
1966, Smathers also voted against legislation aimed at the Du Pont estate’s control over the Florida National banks. Since then, he has left the Senate floor for its darker wings, where he lobbies for southern wealth and large corporations. Indeed, Smathers has been acquiring a whole new set of very interesting friends in Florida. Smathers was the guest of honor at the ground-breaking ceremony of the Key Biscayne Bank, in which Richard Nixon held savings account No. 1. This bank was largely controlled by Charles G. (Bebe) Rebozo, a close friend of Nixon and of right-wing Cuban counterrevolutionaries in Miami. Another director was Robert Abplanalp, another millionaire friend of Nixon, owner of a Bahamas island frequently used by President Nixon as a retreat, and landlord of one of the rented houses in Nixon’s official Florida White House compound at Key Biscayne.