As tourist end destinations go, Izamal is one of Yucatan’s finest examples of colonial era architecture and well worth your time to explore and get to know.
Izamal, known as the yellow city because most of its buildings are painted yellow, is a lovely colonial town that contains gigantic Mayan temples throughout. Climb to the top of the tallest; the view is spectacular.
Explore the magnificent 1500s church. Tour guides are available at the church and monastery entrance. 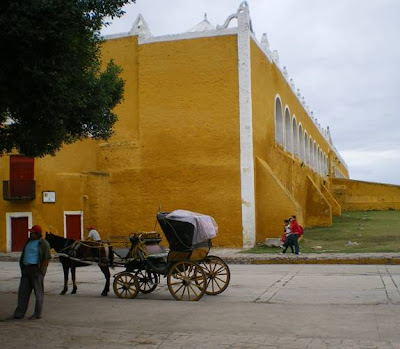 Take a carriage ride or tricycle taxi city tour, visit the municipal market, and sample the local foods that range from fine dining to a cocina económica where you can get stuffed on local specialties at bargain prices. Souvenir shops abound and real authentic Mexican folk art is here.
Izamal was put on the modern map by a visit from Pope John Paul II in August of 1993.  Bishop Fray Diego de Landa put it on the ancient map in the 1500s. 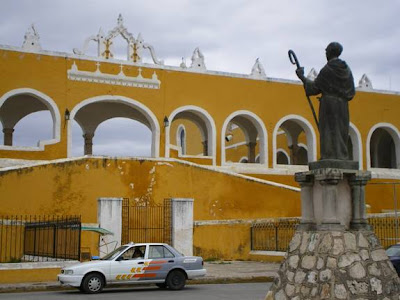 
Izamal has a rich Mayan and conquistador history. Huge temple pyramids are still prominently part of the town. A 16th century Franciscan monastery is situated atop the base of one of them. The statue in the photo above of Bishop Diego de Landa faces the monastery he directed to be built. In July 1562, Friar Diego de Landa held an auto de fe Inquisitional ceremony in Maní, burning a number of Maya books and 5000 idols, saying that they were "works of the devil."
The colossal amount of stone harvested from the ancient Mayan temples that stood here to build this city center is simply mind boggling considering that several enormous pyramids still remain standing to this day. We recommend Izamal as a must-see place. Bring your camera, read-up ahead of time, and by all means take a guided carriage ride.
Take your time and spend two or three unhurried days here. It is just too good to hurry through.
Bus and taxi connections on to Mérida and Valladolid are frequent. The bus terminal is located in the downtown area.
Accommodations are numerous. Check Lonely Planet or Moon guide or ask locally.
John L. Stephens in his book Incidents of Travel in Yucatan, gives this reflection on his 1840 visit to Izamal:
The eye turned involuntarily to immense mounds rising grandly above the tops of the houses, from which the whole city had been built, without seeming to diminish their colossal proportions, proclaiming the power of those who reared them, and destined, apparently, to stand, when the feebler structures of their more civilized conquerors shall have crumbled into dust.
Read more about this one-of-a-kind colonial city with its huge Mayan temples in the books, Yucatán’s Magic, Mérida Side Trips and Yucatan for Travelers - Side Trips: Valladolid to  Tulum.

Posted by JJ Yucatan at 6:45 PM No comments:

On a beautiful balmy and serene December afternoon in 1972, my wife and I arrived in St. Augustine aboard our home built 46-foot sailing vessel Dursmirg. Sailing with us was Jim Muller from Savannah, Georgia.


We were just wrapping up an adventurous four month maiden voyage from Superior, Wisconsin. This trip took us across the Great Lakes, through the Erie Barge Canal, down the Hudson River to New York, and then south along the Atlantic Ocean and the Intracoastal Waterway.


We arrived in a fairyland and destiny planted us in St. Augustine.


When our crewmate Jim Muller returned to Savannah, Jane and I settled into a pleasant routine that included time each day to take in the local points of interest, shop tourist shops, and do some much needed upgrades to the boat. Our most fascinating endeavor was discovering the historical stories behind the curious monuments, statues, and old narrow streets. Our goal was to investigate the real history behind the Ancient City’s objects of curiosity and try to put a human face on it all. Everything we encountered had its own fascinating tale to tell.


Jane and I were intrigued by the name Ponce that popped up everywhere we turned.


There was Ponce Boulevard, Ponce Hotel, Ponce Country Club, Ponce Motor Lodge, Ponce Care Center, Ponce BP, Ponce Golf Course, Ponce Rehabilitation Center, Ponce Exxon, Ponce Landing, and even a Ponce monument and more. What could this all be about? Our curiosity was aroused.


We began looking into the Ancient City’s history. Our first effort began by taking the sightseeing train. The narrated tour took us to all the attractions.


As the tour train approached the entrance to the Fountain of Youth, the narrator stated that this was the place where old people arrived in wheel chairs and were rolled out in baby carriages. Our curiosity was keyed up by this spoof, and we just had to investigate.


Upon leaving the Fountain of Youth on the tour train, we recalled what the train operator had told us “Old people are pushed inside in wheel chairs and out in baby carriages.” Now this could be true, but we didn’t notice any baby carriages when we left.


This earliest European visitor planted his name on Florida leaving a lasting legacy in his pursuit of the Fountain of Youth. For whatever it is worth Juan Ponce de León’s search was successful because he never did grow old.


In 1493 Juan Ponce de León, at the age of 18, he set sail with Christopher Columbus on the second voyage of Columbus along with 1,200 of his conquistador countrymen. Spurred on by Inquisition fervor, he quickly rose to political prominence as governor of Puerto Rico by the age of 25, and he was awarded a large land grant and a sizeable slave colony there.


At age 28, while searching for the Fountain of Youth, he discovered Florida.


On a return voyage of colonization to Florida he was injured by an indian arrow and escaped to Cuba where he died of his wound at the age of 47.


On his first voyage to Florida, Ponce de León recorded the latitude of St. Augustine at 30º North.  This information enabled Pedro Menéndez de Avilés to sail directly across the Atlantic Ocean to St. Augustine from the Spanish Canary Islands in 1565.


Note: On the downtown waterfront of St. Augustine is located a larger then life-sized bronze statue of Ponce de León perched on top a marble pedestal. This statue was cast in New York in 1882 from the metal of English cannons captured in 1792 at San Juan, Puerto Rico. An identical monument stands in downtown San Juan today.


In our explorations of the streets of St. Augustine looking for historical stories to unfold, it wasn’t long before we became well acquainted with the Ponce family.


While we were aboard Dursmirg and in the anchorage in Matanzas Bay off the City Yacht Pier, a spot that had been used as an anchorage for centuries, we snagged an ancient ship’s anchor. This brute was a chore to retrieve. It was nearly ten feet long and still had attached a very long length of enormous chain. What made this particular anchor interesting was that it was a “stockless” style anchor of the type used by old Spanish sailing vessels at least two centuries ago.  Word of our recovery of the anchor got around St. Augustine fast, and it wasn’t long and Jimmy Ponce paid us a visit with cash in hand—he wanted that anchor! We were happy for Jimmy to get it and an instant friendship was formed. 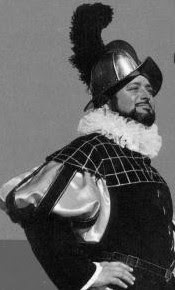 Jimmy’s ancestry goes way back many generations to the very first Spanish settlers of the Old City.


And as America goes you just can’t be more established than that.

In 1965, enterprising Jimmy, making the best of every situation, donned the outfit of a conquistador and was off on a nationwide publicity campaign to promote St. Augustine and put the Oldest City on the map.

Jimmy was in his own element when he dressed the part of his explorer ancestors.

Read more about St. Augustine’s colorful history and its remarkable people in the book, Sailing to St. Augustine available in paperback and digital editions worldwide.


This book is dedicated to James Augustine (Jimmy) Ponce Sr., his wife Jackie, and his father-in-law David Swain.


Jimmy and his beautiful supportive wife Jackie made an unbeatable team of two. They built their business making it into something St. Augustine could be truly proud of.


David Swain, Jimmy’s father-in-law,  loved to tell about the Florida history that he lived and loved.

Posted by JJ Yucatan at 5:04 PM No comments: