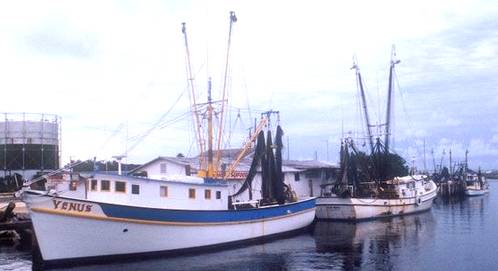 Perhaps the most beautiful shrimp trawler to ever originate in St. Augustine, the Venus, pictured here, was the last to come out of Xynides Boat Yard: Old World Greek craftsmanship at its finest.
DESCO, St. Augustine’s largest builder of fishing trawlers, began in 1947 and became the largest employer in St. Augustine.  They soon sold so many trawlers that they adopted the slogan “The Sun Never Sets on a Desco Boat”.
When Jane and I arrived in St. Augustine aboard our boat Dursmirg back in the fall of 1972, St. Augustine was the trawler building capital of the world. The two biggest players in the industry were DESCO (Diesel Engine Sales Company) and St. Augustine Trawlers, located across the river, was a distant competitor.
There were numerous small mom and pop operations building wooden trawlers: Harry Xynides, Leonard Nix, and Steve Sarris were true high quality craftsmen and incredibly clever. Steve Sarris, for example, would built a complete first class shrimp trawler from stem to stern with a crew of six workers under the shade of an old oak tree that they also used to hoist the bow stem into place.  Every two months another new Sarris trawler was launched from a lot with no railway or sophisticated equipment, just the old oak tree and lots of Old Country Greek shrewdness. They were very nice, well crafted, and expertly finished vessels.
Read the rest of this fascinating story of the St. Augustine boat building and fishing industries in the book; Sailing to St. Augustine: Travels of Dursmirg. The book is available in paper and digital editions worldwide.
More info
Posted by JJ Yucatan at 9:32 AM