Sailing the Sea Islands, Savannah and the Waving Girl 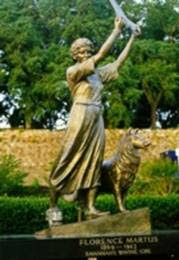 Waving Girl: This statue on the riverfront in downtown Savannah, Georgia, commemorates the Savannahian Florence Martus, (1869 – 1943). She had lived near the Savannah River Harbor entrance and waved to every ship that passed -- for 44 years!

At the eastern end of the old waterfront warehouse district in downtown Savannah is situated the Waving Girl monument that relates one of the saddest stories I can remember. The Waving Girl had more significance to us after being told her heartbreaking story by a personal friend of ours who took her place.
The Waving Girl story as related to us by Billie Burn from Daufuskie Island, South Carolina: Billie told Jane and I of the young girl, Florence Martus, who became known as the Waving Girl.  As we recalled the story; this young lady, whose brother was the lighthouse keeper, had a love affair with a sea going sailor who promised to return to his love.  Everyday this lady would go out to the lighthouse station and wave to all incoming ships in the hope that her lover would be returning as promised.
The Waving Girl passed her entire life in undying hope, and she faithfully met each ship with a wave looking for her lover who never returned.
Over the years, the ships came to expect the lady’s wave when they passed.
After the death of the Waving Girl in 1943, the wife of the new light keeper kept the tradition of the Waving Girl alive by waving at each passing ship in the Savannah River. Billie Burn and her husband Lance were substitute light keepers that maintained the lights on the Savannah River and also along the Intracoastal Waterway.  When Billie and Lance were on duty, Billie took the place of the Waving girl and waved at each passing ship. 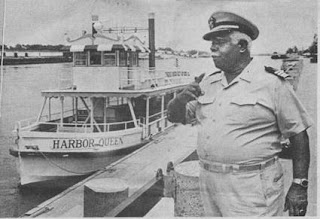 The Waving Girl was also the name of a riverboat owned by Captain Sam Stevens that docked downtown in the historic district on the Savannah River. Jane and I, in the following years, got to know Captain Sam and his boat when we, along with many of the residents of Daufuskie Island, South Carolina, took the once a month trip to Savannah aboard Captain Sam’s boat the Waving Girl.
I have written more of this fascinating story in Sailing the Sea Islands, Travels of Dursmirg, (Summers at Daufuskie) available in paperback and digital editions worldwide.
Read more.

Don't know why more is not shared about Savannah's real riverboat captian, Captian Sam Stevens? Can anyone tell me.