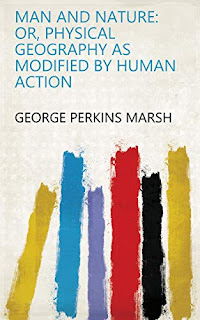 America's first environmentalist, George P. Marsh's encyclopedia sized report on the planets status holds answers to human impact. This timely old book critically looks at alterations to the environment over the entire span of mankind's involvement.. Consequences of atmospheric, oceanic, topographic, and even socially are examined in great detail from contrasting views using documented sources.
Though the book is huge in scope it approaches each subject with scientifically minded objectivity. The book impacted the mindset of many powerful thinkers who took Marsh's message to heart.
The battle of environmentalism versus man's insatiable drive to exploit every earthly resource beyond extinction and total plunder is balanced on a tipping scale favoring the greedy money hungry.
The book is in the public domain and downloadable for free from Amazon.com and Project Gutenberg.

Excerpts:
"Wherever he plants his foot, the harmonies of nature are turned to discords. The proportions and accommodations which insured the stability of existing arrangements are overthrown. Indigenous vegetable and animal species are extirpated, and supplanted by others of foreign origin, spontaneous production is forbidden or restricted, and the face of the earth is either laid bare or covered with a new and reluctant growth of vegetable forms, and with alien tribes of animal life. These intentional changes and substitutions constitute, indeed, great revolutions; but vast as is their magnitude and importance, they are, as we shall see, insignificant”

“Since the invention of gunpowder, some quadrupeds have completely disappeared from many European and Asiatic countries where they were formerly numerous. The last wolf was killed in Great Britain two hundred years ago, and the bear was extirpated from that island still earlier. The British wild ox exists only in a few English and Scottish parks, while in Irish bogs, of no great apparent antiquity, are found antlers which testify to the former existence of a stag much larger than any extant European species.”

“If man is destined to inhabit the earth much longer, and to advance in natural knowledge with the rapidity which has marked his progress in physical science for the last two or three centuries, he will learn to put a wiser estimate on the works of creation, and will derive not only great instruction from studying the ways of nature in her obscurest, humblest walks, but great material advantage from stimulating her productive energies in provinces of her empire hitherto regarded as forever inaccessible, utterly barren.”
About George P. Marsh (from Wikipedia https://en.wikipedia.org/wiki/George_Perkins_Marsh

George Perkins Marsh (March 15, 1801 – July 23, 1882), an American diplomat and philologist, is considered by some to be America's first environmentalist and the precursor to the sustainability concept,although "conservationist" would be more accurate. The Marsh-Billings-Rockefeller National Historical Park in Vermont takes its name, in part, from Marsh.
Posted by JJ Yucatan at 10:24 AM No comments: