Mérida has its own versions of the National Enquirer. They drip with blood and sizzle with sex.


Here in Mérida, our friend Mickey sells several different newspapers on a street in front of a supermarket where we shop.


Today Mickey yelled when he saw us approaching the market on our bicycles, “Your photo is in the newspaper.  It is of you leaving a cantina. I saved a copy for you!” 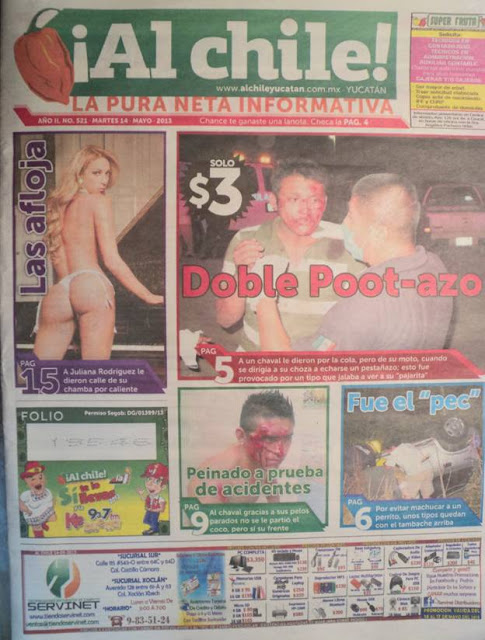 On the bottom of page 4: 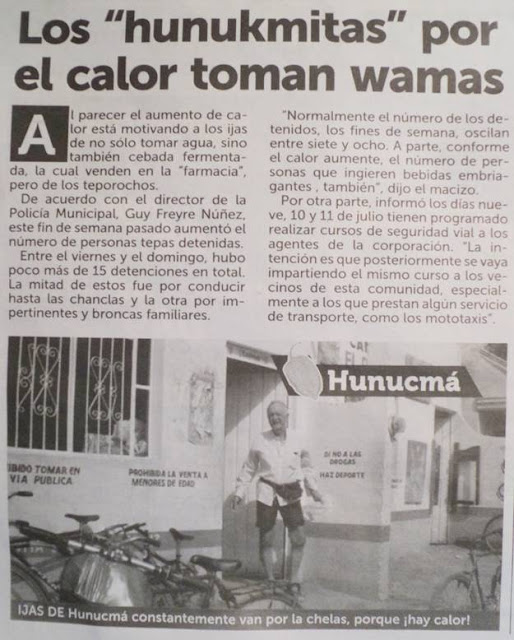 
Below is a shortened translation of the above article.  The article contains many Yucatecan slang words; not all were literally translated.


Because of the hot weather, the people of Hunucma drink “wamas” (A “wama” is a quart-sized bottle of beer}


The increased heat is motivating the people to not only drink water but to drink fermented barley sold in “pharmacies” (bars).


According to the chief of the municipal police, Guy Freyre Núñez, this past weekend saw an increase in the number of drunks.


Between Friday and Sunday, there were 15 people detained.  Half of these were for driving while drunk and the others for disorderly conduct.


Normally the number detained on a weekend ranges from 7 to 8. As the heat increases, the number of people who drink alcoholic beverages does too," said the police chief.


Also, the chief said that July 9, 10, and 11, are scheduled to give road safety courses to police officers. "The intention is to then teach the same course to the residents of this community, especially those who provide a shuttle service, such as motorcycle taxis.”


Sons of Hunucma constantly go for “chelas” (beer), why? Because of the heat!

A note about the newspaper's photo of John in front of a bar in Hunucma:


Jane snapped the photo of John in December of 2010 in Santa Elena…not Hunucma.
The newspaper lifted the photo from our blog: view here.


“The Goddess of opportunity may give us a chance only once in our lifetime; we couldn’t afford to miss it. With thirty-odd years of age, the time was right. We (my wife and I) built ourselves a boat – not very big; 20 feet – and off we were on the greatest adventure anyone could hope to experience.” Hein Zenker


Siggi and Hein Zenker on Thlaloca Dos signed our logbook on February 15, 1976, while Dursmirg was anchored at Boot Key Harbor, Marathon, Florida.


Without a doubt, the nicest looking boat to pull in and anchor at Boot Key anchorage was Thlaloca Dos. This precision built sailboat was sailed by the saltiest sailors of the group, Hein and Siggi Zenker. However, they were unassuming and immediately very much a part of our dropout anchorage community. They fit in to it naturally. In no time at all, they struck up friendships with all of the boaters in the harbor.


Hein Zenker on Thlaloca Dos and Bubba Schill aboard his Jaeger hit it off like life long friends and soon discovered that they both had something in common. Both served their country during World War II, but ironically they had been on opposing sides, Bubba in the American Navy and Hein in Germany’s Merchant Marine. They were each victims of geography and political leaders that had whipped the world into a monumental state of hate and terror. The chemistry that Bubba and Hein felt for each other was one that I am sure could only have been conveyed by the indelible scars left on their youthful souls and then carried throughout their lives.


Hein and Siggi could look at the world and especially this little collection of social outcasts that made up the Boot Key anchorage with empathy because they had both survived World War II Germany from within and gone on to fulfill a dream that took more determination, dedication, and forceful self-motivation than I had ever seen.


As a matter of fact, with only a couple of exceptions, all of the live-aboard boaters that made up Boot Key anchorage back in the mid 1970s did not come to boating with financial backing and each carried their own load in life.


Some were world-class sailors and others couldn’t even tie a nautical knot, but one common thread bound us together and that was that we all were in this boating life for the adventure and freedom of sailing over distant horizons.


In the world of strange coincidences, this next story unfolded:


Back in St. Augustine, Florida, in the spring of 1973, after Jane and I had just spent our first winter living aboard Dursmirg, which we anchored for some time in Matanzas Bay near the St. Augustine City Yacht Pier, we met a young man living aboard a small sailboat. That spring we were the only two boats anchored in Matanzas Bay. We thought the longhaired hippie looking young man was strange because of his profession, which we had never heard of before.  He was a computer programmer who daily commuted to Jacksonville to work, leaving his boat Thlaloca anchored in the bay.


The thing we did not realize at the time was the significance of that little boat with its strange name.


We would later learn the incredible story of the vessel’s monumental maritime achievement plus become close friends with the very people that actually built the boat and then went on to sail it into world history. The builders were Hein and Siggi Zenker and their historical feat was to sail their 20-foot Thlaloca around the world. It was the smallest vessel to do so at the time.


Hein and Siggi started building their little 20-foot sailboat in Iron Bridge, Ontario, Canada, and finished it in California where they launched it to begin the Australian leg of their round the world cruise.  Siggi later told Jane and me that that trip was 95% misery. When I asked Hein about his navigational skills, he said that he did not have any at the time, but that he figured he would have plenty of time to study and besides he also figured that he could not possibly miss anything as large as the continent of Australia. 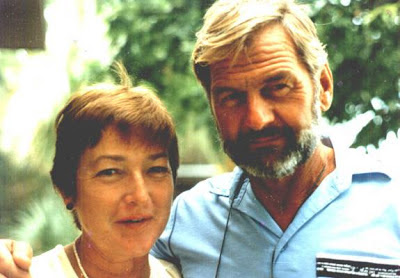 
This is a story about people that not only dreamed the impossible dream but also lived it to the fullest. The husband and wife team of Hein and Siggi Zenker tell their extraordinary story in riveting first person fashion that will leave the reader enthralled.


Jane and I became good friends and neighbors to these real life adventurers that did as we did and put the work-a-day world behind them, built their own boat, and sailed away. They did it ten years before we began our voyage of Dursmirg.


We are deeply impressed by their book and happen to know that the stories of their adventures within are very true but cannot fully relate the dynamics of their powerful free spirits.


To us, they are the kind of people that make the world a better place and knowing them has forever added to our hope that dreams are there to be lived.


Apathy scuttles many a dream boat.


Quotes from the book:


“Far better it is to dare mighty things, to win glorious triumphs, even though checked by failure, than to rank with those poor spirits who neither enjoy much nor suffer much, because they live in a gray twilight that knows not victory nor defeat.”


“Crouched deep in the cockpit, I remained there for a long time and observed the foaming seas and listened to the howling gale. And for the x-time, I pondered why apparently sane people venture into this mess repeatedly.”


“Are we the only dreamers? Blinded in believing we are at home in an element, which in reality is out to destroy us, by forces we are unable to control nor understand. Fortunately “dreamers” are optimists who do not cease believing in their power to prevail-like the man in the cartoon, floating on a raft in the middle of the ocean, catching wind in a net.”


I rank this book with the best of the best sea stories I have ever read, need I say more?
Read more about Hein and Siggi in Sailing the Florida Keys: Travelsof Dursmirg by John M. Grimsrud.
Posted by JJ Yucatan at 4:52 PM No comments: