Yucatan for Travelers - Side Trips: Valladolid to Tulum


Yucatan for Travelers - Side Trips: Valladolid to Tulum, is an idea book designed to make every minute of your tropical experience interesting, rewarding and full of unique pleasures. Visit the unpublicized gems of Mayan temple towns and quaint colonial villages. Travel back roads leading to the best beaches of the Caribbean and Gulf of Mexico.
For the armchair traveler and people that have been to Yucatan before and think that they have seen and done everything, Yucatan for Travelers - Side Trips: Valladolid to Tulum will open the door to special places not presented in tours or guided excursions. 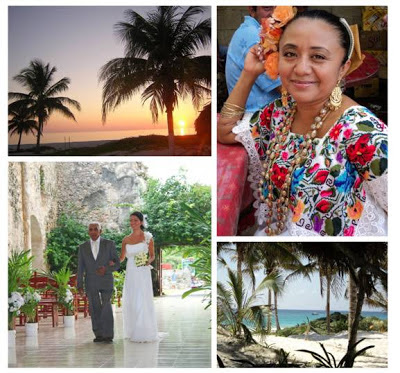 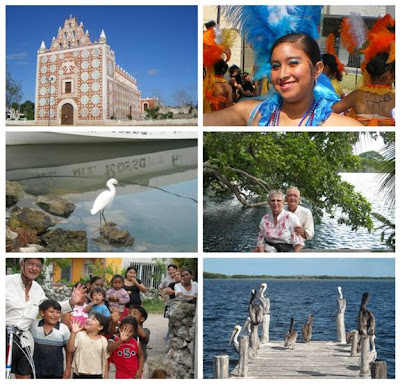 Photos from the back cover:
Top left: Uayma church near Valladolid.  Top right: carnival colors. Middle left: Rio Lagartos – bird watching country.  Middle right: John and Jane at a Caribbean cenote. Bottom left: John with the smiling faces along the Caste War route.  Bottom right: pelicans at San Felipe lagoon in northern Yucatan.
Yucatan for Travelers flows like a novel and is a smooth reading book that will not bog you down with verbal detritus. It is a fun and enlightening traveling companion.
Yucatan for Travelers - Side Trips: Valladolid to Tulum, published 2013, is the second book in a series. Yucatan’s Magic - Mérida Side Trips, the first in this series, has had worldwide distribution, five star ratings, and is available in paperback and digital editions.


The tradition of blowing a conch horn as been passed down over the centuries from Florida’s first inhabitants. 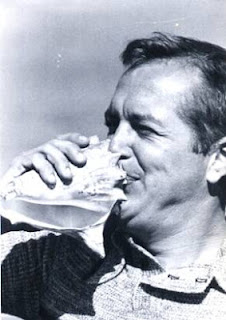 
The horn pictured is of a “roller” or not fully matured conch shell; these produce the lowest-shrillest sounds. The beauty of these horns for boaters is their extreme loudness and simplicity (weatherproof with no moving parts or anything to recharge).

The prehistoric Timucuan people built mounds along Florida’s shores.  On the northeast coast of Florida, twenty-two large mounds made of stacked oyster shell were visible from seven miles out to sea and marked on sailing charts. These ancient mounds had a height of more than fifty feet and each covered two acres. Early seagoing traders and explorers used these mounds as aids to navigation .In 1917 twenty-one of these mounds were removed to be used for road fill. Today only one mound, Turtle Mound, remains.  It is located 9 miles south of New Smyrna Beach within Canaveral National Seashore.

The pyramid building Chontal Maya, who evolved from the Olmec of Mexico, used conch horns as signaling devices. They could have easily passed their inventive skills and more on to their many ports of call. It is not clear exactly where all of the innovative Mayan techniques were acquired or developed, but they had a huge impact on the Americas.
Since pre-Hispanic times, the seagoing Chontal Maya of Tabasco, Mexico, using large trading canoes ranged as far as Panama, Florida, Cuba, the Caribbean Islands, and Veracruz.  They understood celestial navigation and employed sophisticated navigational aids that included lighted range markers. The Maya excavated canals to connect the sea with inland river systems, thus extending commerce and spreading their knowledge.

Blowing a conch horn is the mark of a bona fide Florida sailor.

Learn about John Grimsrud’s connections to Florida and the Maya of Yucatan in his books:

And his latest:
Yucatan for Travelers, Valladolid to Tulum

Excerpt from The Maya by Michael D. Coe:
“ Yucatan was the greatest producer of salt in Mesoamerica…commerce was cornered by the Chontal Maya, or Putun, such good seafarers that Thompson called them “the Phoenicians of Middle America.” …their great canoes put into exchange goods with the island Maya…for they had much to exchange- especially cacao and feathers of tropical birds for copper tools and ornaments…”

Posted by JJ Yucatan at 6:46 PM No comments:


In the early 1840s the explorer John L. Stephens used Santa Elena, then known as Nohcacab, as a base from which he and his companions explored the Puuc region. In his book, Incidents of Travel in Yucatan, Stephens recorded accounts of the people of Nohcacab and their culture, and his associate Frederick Catherwood made drawings of the village and the region.
In 1840 John L. Stephens said of  Nohcacab’s location:
“The whole of this region is retired and comparatively unknown. The village is without the line of all the present main roads; it does not lie on the way to any place of general resort, and is not worth stopping at on its own account.”
Stephens visit to Nohcacab was before the age of steam power, the prolonged Caste War, the Mexican Revolutionary War, and the two World Wars. Yucatan was like an island, isolated and only accessible by sail from the outside world.
An excerpt from  Incidents in Travel in Yucatan by John L. Stephens:
I was an hour crossing the sierra, [from Uxmal] and on the other side my first view of the great plain took in the church of Nohcacab, standing like a colossus in the wilderness, the only token to indicate the presence of man…" 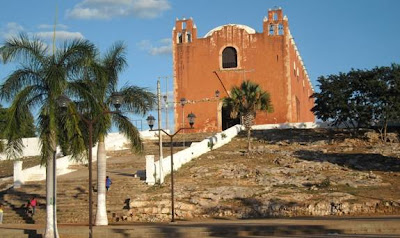 View of the Santa Elena church, 2013
At the front of the church, a long flight of stairs leads to the entrance, a stairway no doubt used since ancient times when the Maya worshiped their own gods at a temple that stood here.
Santa Elena has kept this small corner of town virtually unchanged over all these years. Stephens and Catherwood resided in the building on the east side of the church during their visit. Their apartment is now a museum that is worth a visit.  The museum contains some mummified human remains, which some people speculate may be children of German colonists who settled here.
Returning from Uxmal to Santa Elena on our bicycles, a view of the distant church of Santa Elena perched above the central plaza came into view just as John L. Stephens described in Incidents of Travel in Yucatan John L. Stephens described his first view of the church of Nocacab:
“ I was an hour crossing the sierra, and on the other side my first view of the great plain took in the church of Nohcacab (Santa Elena), standing like a colossus in the wilderness, the only token to indicate the presence of man. Descending the plain, I saw nothing but trees, until, when close upon the village, the great church again rose before me, towering above the houses, and the only object visible.
We found Stephen’s description of this place amazingly accurate, and the only noticeable change since 1840 when it was written was the fact that now there is a new paved and smooth road from Uxmal directly to Santa Elena.” 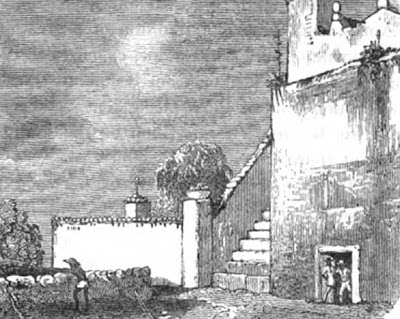 1840 engraving by Frederick Catherwood of the north side of the church.

This is the  apartment where the Stephens’ group took up residence.
Stephens wrote about the church and apartment:
“The casa real is the public building in every village… to contain apartments for travelers. In the village of Nohcacab, however, the arrival of strangers was so rare an occurrence that no apartment was assigned…given to us was the principal room of the, [church] building, used for the great occasions of the village...
The walls were whitewashed, and at one end was an eagle holding in his beak a coiled serpent, tearing it also with his claws. Under this were some indescribable figures, and a sword, gun, and cannon, altogether warlike emblems for the peaceful village which had never heard the sound of hostile trumpet.
On the wall hung …a "notice to the public" in Spanish and the Maya language, that his Excellency the Governor of the State had allowed to this village the establishment of a school that, being endowed by the public funds, it should not cost a medio real to any one.
It was addressed to vecinos, or white people, indigenos, or Indians, and other classes, meaning Mestizoes.” 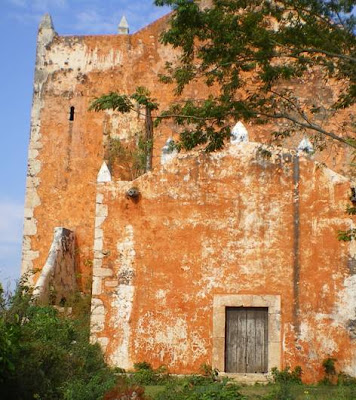 This is a present day view of the Santa Elena – Nohcacab - church and the apartment of John L. Stephens’s exploration group in 1840.
It now contains a unique museum of mummified past residents, and other historical curiosities.
Stephens gave this description of the apartment where he stayed:
“Death was all around us. Anciently this country was so healthy that Torquemada says, "Men die of pure old age, for there are none of those infirmities that exist in other lands; and if there are slight infirmities, the heat destroys them, and so there is no need of a physician there;" but the times are much better for physicians now, and Doctor Cabot, if he had been able to attend to it, might have entered into an extensive gratuitous practice. Adjoining the front of the church, and connecting with the convent, was a great charnel-house, along the wall of which was a row of skulls. At the top of a pillar forming the abutment of the wall of the staircase was a large vase piled full, and the cross was surmounted with them. Within the enclosure was a promiscuous assemblage of skulls and bones several feet deep. Along the wall, hanging by cords, were the bones and skulls of individuals in boxes and baskets, or tied up in cloths, with names written upon them, and, as at Ticul, there were the fragments of dresses, while some of the skulls had still adhering to them the long black hair of women.”
Today Nohcacab, Santa Elena, is still off the main roads although it now has frequent bus and colectivo taxi service. It is a perfect place to headquarter for excursions into the Puuc region with the Mayan ruins of Uxmal, one of the most beautiful of all Mayan archaeological sites, close at hand.
To find out why we love this interesting place away from tour buses and trinket shops read the book:
Yucatán’s Magic: Mérida Side Trips: Treasures of Mayab, available in paperback and digital editions worldwide.
Today Santa Elena has good accommodations and a diversity of eating establishments. Yucatan is blessed with abundant quiet paved roads connecting the area’s Mayan temples, stately haciendas, and colonial villages…what are you waiting for?

Posted by JJ Yucatan at 4:26 PM No comments: